Matilda The Musical with Encore Tickets

You must have been living under a rock the past decade if you didn’t know Matilda The Musical was on stage in London, and then touring around the UK. Matilda The Musical is the multi-award winning musical from the Royal Shakespeare Company, inspired by the beloved book by the incomparable Roald Dahl and me and Theo popped along to see the show before it departed from Cambridge Theatre in West End.

I’ve wanted to see this show for years, so I was thrilled when Theo bought tickets for my birthday last summer from Encore Tickets. We hopped on the train from Milton Keynes and headed down to London for the day, first stopping off for lunch in Covent Garden and a little bit of shopping before heading over to the West End in the early evening. 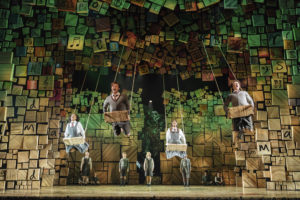 With book by Dennis Kelly and original songs by Tim Minchin, Matilda The Musical is the story of an extraordinary little girl who, armed with a vivid imagination and a sharp mind, dares to take a stand and change her own destiny. And it’s deservedly got an amazing amount of accolades behind the show including 85 international awards, including 16 for Best Musical. Matilda The Musical continues has delighted audiences in London and on tour across the UK and Ireland. And it is worth nothing that Tim Minchin’s musical style really shines through and is a refreshing take on the musical genre.

If you didn’t know already, Matilda is an extraordinary girl with a vivid imagination and a sharp mind whose talents are constantly belittled by her cruel parents and headmistress. Dreaming of a better life for herself, she dares to take a stand against these oppressive forces and takes her destiny into her own hands. And it’s within this story we follow the life of Matilda as she stands up for herself in an array of situations including to her parents and horrible headteacher Miss Trunchball.

Matilda is not appreciated by her cruel, neglectful parents, the Wormwoods, who would have preferred a child who likes the same things as they do, or simply a boy. And the show follows her as she begins school, and meet Miss Honey, a lovely teacher who relates to her own situation. I won’t go on and on, as you know the story, but instead talk about how utterly amazing the adults and children were in this wonderful well-known show. The role of Miss Trunchball is played by Craig Els, and it is a role played extremely well, with a mixture of camp humour and sinister physicality. The role could of been scarier, but due to the amount of children that come to watch this show, it seems they have played the scares down a little. Craig has a powerful presence on stage and is at his best during the gym scene which features the snappy The Smell of Rebellion song.

Matilda is played by the wonderful Poppy Jones, an already well-known name in the theatre circuits, with an assertive personality and does a sterling job holding the stage, and audience, especially when she sings. Her talent seems to never end, and alongside Poppy, the other children are also the same, with them all holding great confidence, and timing.

And last, but not least, Carly Thomas plays Miss Honey. She doesn’t have the same likability as the character in the film, as she seems far more sensitive and cowardly, however as an actress Carly is amazing, and holds the stage with her incredible voice.

Overall, the show is amazing, with the perfect balance of humour and sensitivity that comes from darker themes in this show. However, Dahl’s humour is written all over it, and this is why this musical continues to be one of the best there has ever been. It is the musical that has everything; humour, courage, laughs and tears. Do not miss this show!! UK Staycation: Weekend Wanderings at The Pointer at Brill In the Company of Royalty at Castle Hotel Windsor